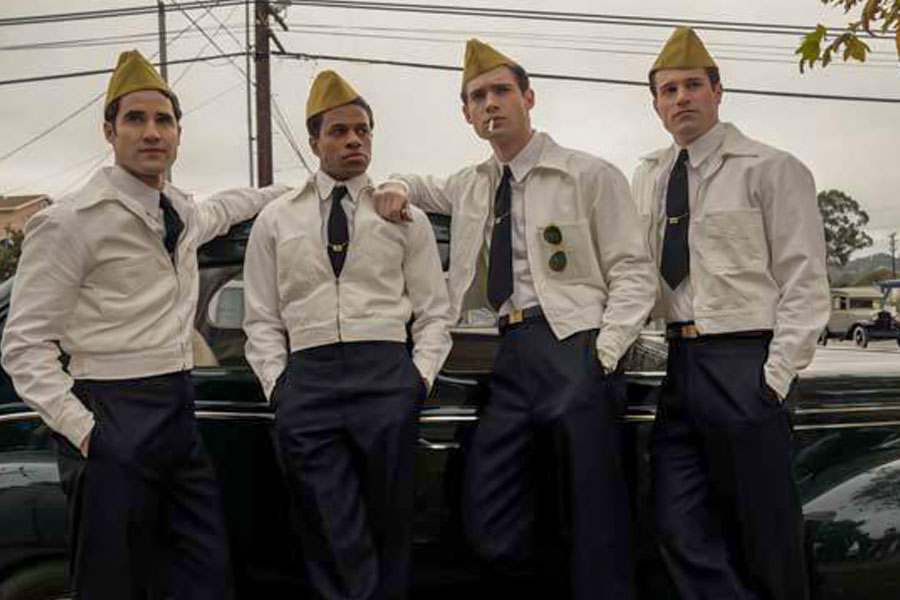 If, like me, you’ve watched the new Netflix series called Hollywood, please read on. It’s wildly entertaining, but are the things that happen believable? Let me list some of them.

Men in powerful positions in Tinseltown abuse that power by coming onto aspiring actors.

Even without the Me Too movement, I don’t think too many people would have difficulty believing that.

In 1948, a woman takes charge of a major film studio (after her husband has a stroke and again after he dies) and makes a real fist of it.

Although this didn’t happen in real life, it’s totally believable.

As at 1948, it would be another twenty-eight years before a woman was nominated for a best Director Oscar, and another sixty before a woman won it. But long before 1948, there were women who took over from their husbands or fathers and assumed official – and very real – positions of power, doing things that even the most ruthless male Hollywood mogul would never have contemplated.

When King Henry the Eighth twice went on military campaigns in France, both times he made a wife Regent, to rule the kingdom in his absence.

The first time, King James the Fourth of Scotland tried to take advantage of Henry’s absence and invaded England. Catherine of Aragon raised an army which killed the Scottish king in battle. Catherine sent the king’s bloodstained coat to her husband in France. James was married to Henry’s sister, but Catherine didn’t seem to mind how awkward this might make family Christmases. I guess it meant one less present to buy.

Henry’s daughters Mary and England both ruled England as queens. Mary took her throne by force after a plot was hatched to disinherit her. She later made a habit of burning protestants at the stake. Her half-sister Elizabeth made a habit of having her cousins executed.

About thirty years before the events in Hollywood, Mary Pickford was one of the founders of United Artists. In 1950, Lucille Ball founded Desilu Productions with her then-husband Desi Arnaz, and ran it herself from 1962 following their divorce.

In Hollywood, they make the female movie mogul storyline more believable by including a visit from Eleanor Roosevelt, showing how famous, revered and influential she was.

A major Hollywood studio in 1948 produces a film (called Meg) with a romance between an African-American woman and a white man, which turns into a massive hit, wins a slew of Oscars, including for the lead African-American actress, and causes a major change in social attitudes towards African-American people.

That seems far-fetched, given the deep-seated racism in the United States at the time, but anything can be believable on television if it’s set up in the right way.

We believe that Doctor Who can travel through time and space in a police box, because he did that in the very first episode and has continued to do so (on and off) since 1963. If, after more than thirty years, Alf suddenly started doing the same thing in Home and Away, we’d think it was silly.

Hollywood is supposed to be a fantasy about what might have been if filmmakers had shown more courage, but the series doesn’t start that way.

The first half seems to attempt to show what Tinseltown was actually like. Okay, the sets and costumes are so well done, in real life they could not have been as snazzy. Not even Paul Newman had David Corenswet’s dreamy blue eyes. But we see a town where anything goes, as long as you’re discreet or have the power to cover things up. We’re well in before the fantasy of an alternative universe really gets going. By then, it’s too late.

Two men turn up to the 1948 Oscars hand in hand. When one of them wins an Oscar, he publicly thanks his boyfriend from the podium.

Sure, people are shocked, but neither man gets arrested and they both continue to work in town.

Apparently, the film Meg is so influential. Not only does it stop people being racist, it cures them of homophobia as well, even though there aren’t any obviously gay characters in it.

It’s a shame, because a good storyline gets wasted. When Archie tells the studio head that he’s going to take his boyfriend to the Oscars, she would know what damage it could do to the movie he wrote, that she’s risked so much and fought so ruthlessly to get made. They could fall out about it. He could find out that she could be just as ruthless to him.

A lawyer openly seizes and destroys the prints to a major movie.

I was talking with friends about this tonight. I’m a lawyer, and I don’t want to try to persuade you that all lawyers are good, ethical and honest, particularly in a town like Hollywood.  But why do it when you know that the woman who has just inherited the studio could get very angry about it? And why so openly?

My friends thought it would be more convincing if it were done in secret. I agree. Maybe a racist assistant at the studio gets to see a rough cut of the picture, finds it offensive, so breaks in at night and steals and destroys the prints. I could believe something like that.

Jack and Claire fall in love and get engaged.

Sorry, Jack had more sexual chemistry with Claire’s mother, played by a feisty Patti LuPone, who we think is going to be a man-eating client to a first-time gigolo, but shows unexpected vulnerability and tenderness.

People don’t know that Claire is the daughter of the studio boss.

Sure, she has a different surname, but really?

Raymond is prepared to be a prostitute, to help pay the extra costs of one of the sets in the movie he’s directing.

I can believe that some film directors would do anything to ensure that their film gets made. Raymond does not appear to be one of those people. He seems to have a monogamous relationship with his girlfriend, who’s also the picture’s leading lady. He doesn’t seem to be worried about her knowing.

If he’s going to do something like that, why not have his girlfriend find out and have them fight about it? Raymond could say, with some justification, ‘I’m doing this for you.’ She could angst about whether it’s worth it.

Two men with no acting experience, who both do terrible screen tests, suddenly become fine actors after they are cast in a major movie. One of them gets an Oscar nomination for the role.

In My Fair Lady, we believe that a guttersnipe could pass off as a princess in a matter of months, because we see some of the things that Professor Higgins does to train her. In Hollywood, we don’t get much sense about what has brought about the miraculous transformation of the two men in question.

Hollywood is a place where everyone gets what they want, without much effort and in no time at all.

Okay, it’s silly by the end, but even then, Hollywood is entertaining. Like the revamped Tales of the City, I got through this series quickly because I kept staying up late to watch another episode. I’m curious to see where a second season would go.