Billie Jean King was the tennis player who got married, won six Wimbledon singles titles, started the women’s professional tennis circuit and the Women’s Tennis Association, co-founded Team Tennis, fought for equal prize money, had an abortion, got sued by her lesbian lover (well, one of them), and (in 1973) beat 55-year-old Bobby Riggs in front of a live audience of thirty thousand, fifty million TV viewers in the US and another forty million in other countries.

Battle of the Sexes, starring Emma Stone and Steve Carell, is the movie they’ve just released about that match. I’m pleased because it gives me the chance to blog about one of my favourite books: Billie Jean King – The Autobiography. 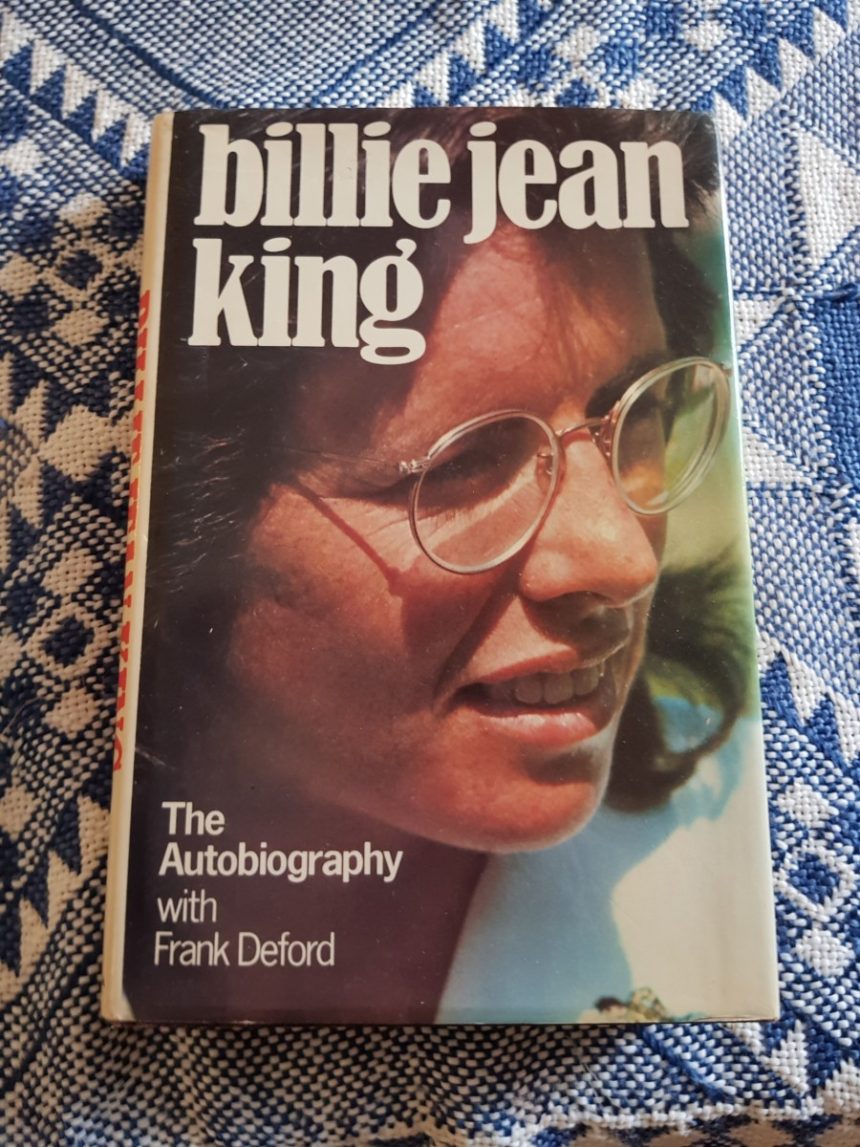 Written about eight years after the match with Riggs, it contains tips and information, such as:

In some ways, it’s just a bit too honest. Do we really need to know that Rosie Casals lost a good chance of winning the US Open in 1968 because she was having horrible menstrual problems right before she played Virginia Wade in the quarter-finals? (And did Rosie want us to know this?)

But it’s also been described as ‘a candid lie’. The book says that after she was outed:

‘… perhaps the unfairest attention fell on Ilana Kloss, because she happened to be my doubles partner at the time…. You can just imagine how Ilana was labelled.’

If you think the women’s tennis circuit has always been a bit catty, here’s what Billie Jean says about some of her rivals:

‘I’ve often doubted that Martina cared all that much for tennis. Instead, I think she primarily loves what tennis will bring her. It doesn’t matter what it is, so long as it is an acquisition.’

On Maria Bueno, who she beat in the 1966 Wimbledon singles final:

‘She was a con, really, because it would have been blasphemy for anybody ever to suggest that someone who looked so good might be lacking.’

On why she used to win matches against Rosie Casals:

‘I was not only a much better player than Rosie, but she was also much lazier.’

On Virginia Wade, the last British woman to win Wimbledon:

‘… the older she got, the more gamesmanship she developed.’

After Margaret Court said, ‘I only play for the love of it’:

‘I just about swooned. Pass-out time! The whole Bobby Riggs thing got started only because Margaret found herself offered $10,000 to pay him for the love of it. And of course she snapped at it ….’

When Chris Evert claimed that she and Evonne Goolagong had at last provided some femininity for women’s tennis:

‘… it made it sound as if everyone of us who had ever come before her had been some kind of witch.’