Nine reasons ‘The Enquiry’ will never be a school play again 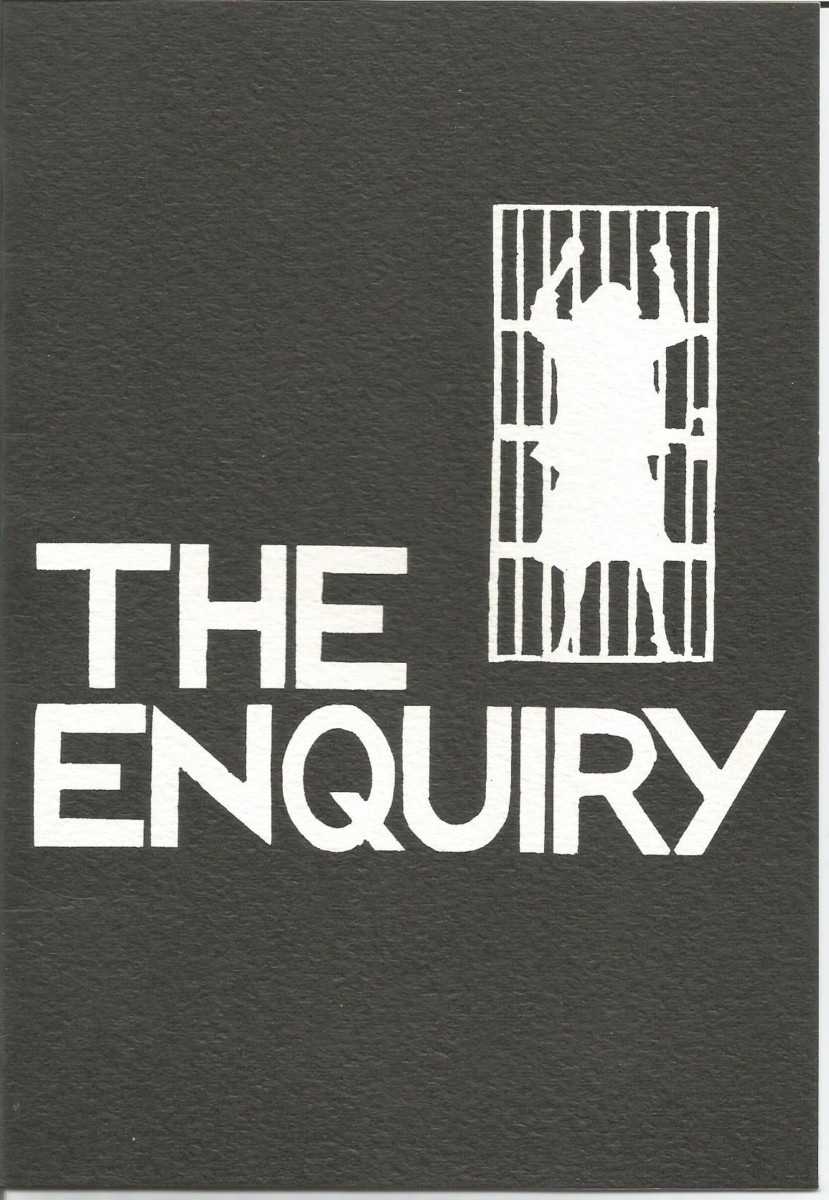 My experience last year of seeing Mercedes College stage The Little Mermaid made me think back to 1985.

Methodist Ladies’ College was putting on The Enquiry – an unladylike play set in a women’s prison – and needed two boys to play the male roles. So I played the Reverend John, the chaplain, described in the script as ‘about fifty, with grey hair … humorous ’.

To research the role, I just needed to spend time at home. My own father was also called John, had just turned fifty-three, had greying hair, had been working as a chaplain for ten years (albeit not in a prison) and liked good jokes.

Although I was on stage for almost the entire Second Act, my role wasn’t important to the plot. In most of the play, the lead part of the Prison Governor was written as a stern, schoolmarmish, conservative bitch (not that there’s anything wrong with that, quite exciting really). The Reverend John was partly there to bring out her lighter side, although the girl who played her brought out warmth and depth regardless.

Every night, The Enquiry played to big, appreciative houses, mostly from Perth’s well-to-do Western suburbs, but no school in Perth would ever stage it today. It’s remarkable a school did thirty-three years ago. Here’s why it won’t be on anyone’s play list:

Those of you who saw my show The Sound of a Social Climbing Nun heard my evil anti-Julie twin’s theory that Maria in The Sound of Music was a lesbian, that Uncle Max was gay (well, actually, I think he was meant to be), but so was Rolf, and the Captain and the Baroness swung both ways. 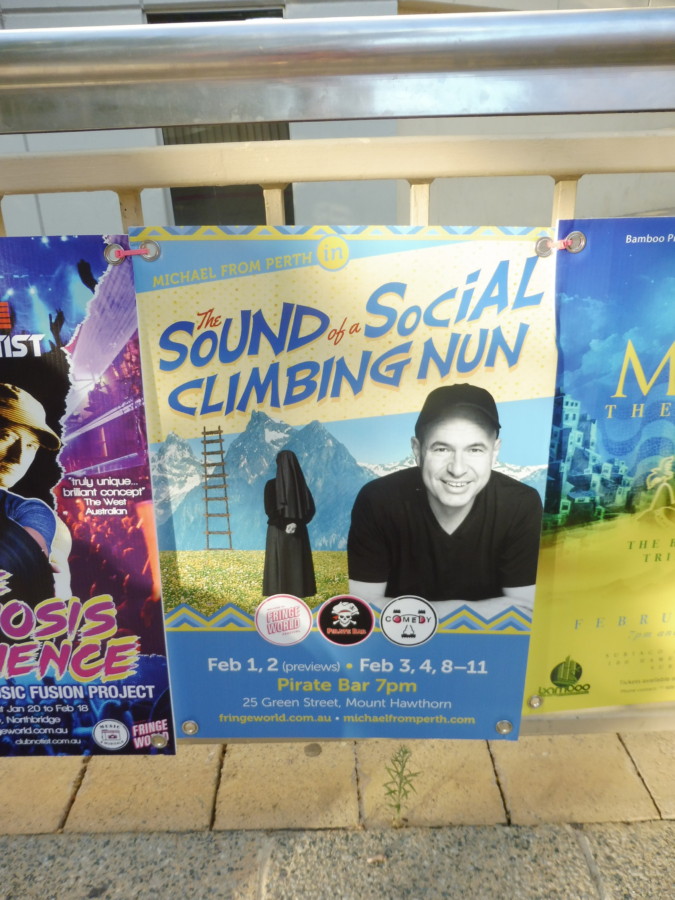 Please hear me out. I am not someone who thinks everyone’s LGBTIQRSTUVWXYZ, but it’s obvious in The Enquiry that two of the characters are.

The enquiry in The Enquiry goes into why Kate, a model prisoner, tried to kill herself.

It’s something to do with a disturbed young prisoner called Gow, and Baxter – a social activist who’s in jail for throwing a brick through an embassy window. (‘Baxter’ is actually called ‘Valentine’ in the script, but the director changed that because it sounded too much like his own surname.)

After some coaxing by my character, a cunning (but endearing) old thief called Marcy gives the big reveal:

Marcy:   Gow and Baxter have a thing.

The Governor:   A thing.

Marcy:   About each other.

Marcy tells the enquirers how Gow and Baxter ‘meet’ in Reception, because ‘it’s not locked and it’s warm with them pipes’.

They later find out that Gow thought Baxter fancied Kate, so beat up Kate.

I could be wrong, and we’re supposed to live in more enlightened times, but would a religious Ladies’ College today put on a play about lesbian jealousy? I suspect not.

In Act III, Baxter defends Gow to the Governor:

The Governor:   Does that mean you’re sick, too?

Reason #3: It has an outrageously offensive theory about what can cause women to be lesbians.

Baxter explains that Gow is a lesbian because a man let her down in life.

Years later, I recounted this theory to a straight woman.

I would say to the man who wrote The Enquiry – I’m sorry, lesbianism is not all about you – but the playwright was actually female.

Reason #4: A woman makes sexual advances at a priest.

My character is, of course, the priest. And again, Baxter, who actually isn’t in the play very much, is the woman. Here’s the exchange:

The Governor: … you may find yourself in serious trouble.

Baxter:   Oh, not in here. I mean – who’s available? Unless … (She glints sideways to the Reverend John – something between a leer and an invitation, lewd and quite horrible)

The three of us who played these parts all became lawyers in real life. Twelve years later, we found ourselves waiting in the same courtroom, and replayed the scene to some of our amused fellow practitioners. 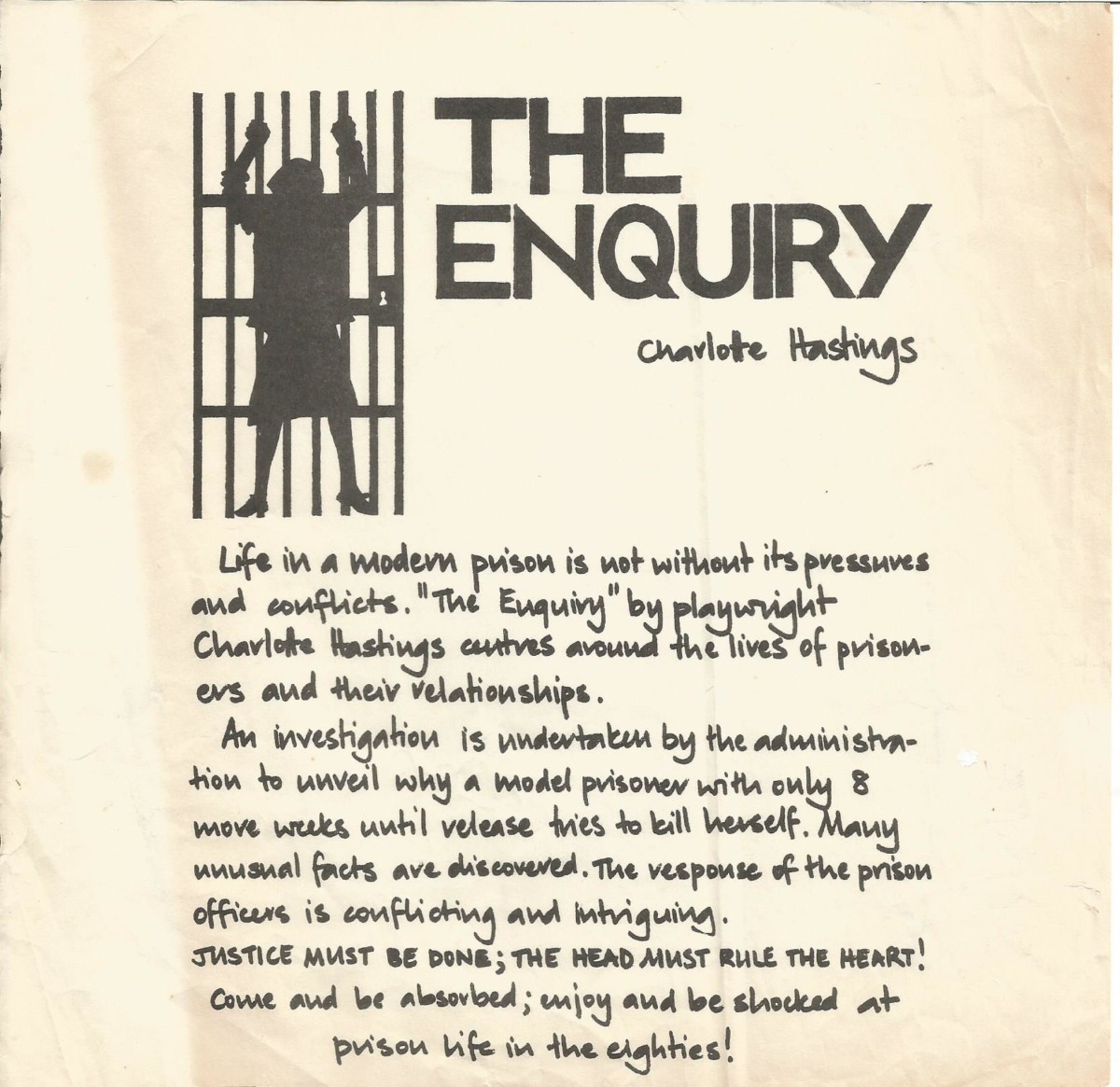 Reason #5: One of the girls in the cast smoked real cigarettes on stage.

Not just one or two. She did it through most of Act II. She played the prison doctor, and practiced daily behind the hall, where the teachers didn’t go.

Reason #6: A person falling backwards has to rely on someone else to catch her.

Okay, they probably would let this through nowadays, but not if the person relied on is as klutzy as I was. Gow has this sort of fit when the Governor confronts her, and the Reverend John is supposed to catch her before she hits the floor.

I couldn’t stand there with my arms out, because my character wasn’t meant to know what she was going to do. But if I was too late – bang!

It worked out fine every time in rehearsal, but on Opening Night, I kind of … missed, and she went flat on the floor. Her dress went up a little too high, which I think she tactfully pulled down, even though she was meant to be unconscious. (Doreen once did something similar in an episode of Prisoner.) I never did get it right after that. On Closing Night, I put my whole body in her way, and we both fell to the floor! 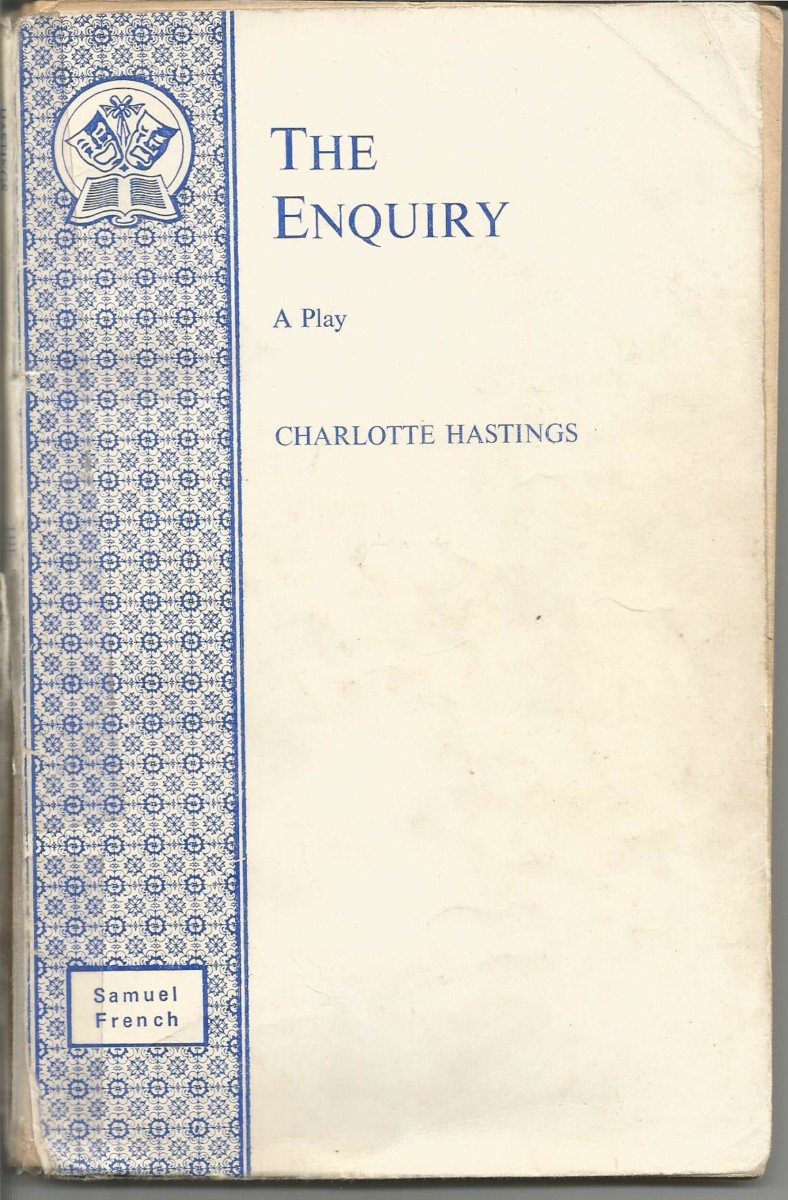 Reason #7: Euthanasia is proposed as the answer to babies with severe disabilities.

Kate is in prison for killing her child, who the Prison Governor describes as ‘hopelessly abnormal’. The smoking prison doctor asks:

Why do we allow such things to live? If it had been an animal it would have been put head down in a bucket…. What is the sane choice? Slide in a merciful needle – or let it grow?

To be fair, other characters, including mine, don’t share these sentiments, but the whole idea is so disturbing, it’s hard to imagine anyone voicing it in a school play today, and certainly not a character who for the most part is sympathetic and amusing.

Reason #8: The disabled baby gets smothered to death.

Though not by Kate. Her husband confesses to the Governor that he did it. In a flashback, we see it happen, and Kate saying she’ll cover for him.

This leads to the climax of the play, in which the Governor tells her Deputy that she’s going to report the husband to the authorities. The Deputy tries to talk her out of it, saying it will break up the family.

It’s left unclear what the Governor decides. She probably plays it by the book and reports it, but we’ve seen her softer side in the conversations with my character, so there’s some room for doubt.

Reason #9: There were boring bits!

Let’s recap. In the Methodist Ladies’ College production of The Enquiry, a bunch of schoolgirls portrayed a jealous violent lesbian, a priest-leering bi-curious brick-throwing activist, a hard-faced Prison Governor, a chain-smoking doctor proponent of baby-killing, a cunning old tale-telling thief, and a beaten-up woman who takes the rap for baby-killing. You call that dull?!?

Well, in between those moments, there was a lot of talking, as you might expect in an enquiry, and more of it … and then some. I think my character was supposed to liven up these boring bits, and if I’d been a better performer, perhaps I would have. But there was only so much the script allowed.

Anyway, what the hell! Overall, despite its problems, The Enquiry was a well-constructed play, and the fact that I’m still thinking about it after such a long time says a lot. I’m glad I was in it. I’m curious to know what plays schools are putting on these days that will be considered unacceptable another thirty-three years from now, and why. I’m surprised that at least two schools in the last few years have put on Sweet Charity, even though it centres on a prostitute who’s trying to get out of the industry.

PS – Thanks to the internet, I can tell you that the Dawlish Repertory Company in Devon, England, recently staged The Enquiry. I was half-tempted to go…