This monologue inspired me to write a tasteful novel, which in turn inspired me to perform my show HOW TO WRITE A TASTEFUL NOVEL. I wrote it in 2007, when Perth’s mining boom meant it was impossible to get tradesmen (and they were always men) to come around, and same sex marriage was a bit of a fringe cause. I’ve cut out a slightly crass sexual reference, but everything else is as it was.

PATRICK IS 35, GAY, INTELLIGENT AND LIVES IN PERTH. PEOPLE DO NOT CONVULSE AT HIS LOOKS, BUT NOR DO THEY THINK MUCH ABOUT THEM.

Nowadays there are only two types of couples: those who meet on the internet, and those who meet on the internet and lie about it. Alfonso and I chatted every day, but he lived in Buenos Aires. The South Pole was closer. I’d planned to spend my long service leave re-tiling the kitchen and bathroom, but my best friend Vaughan and his partner Frank told me to go to Argentina. 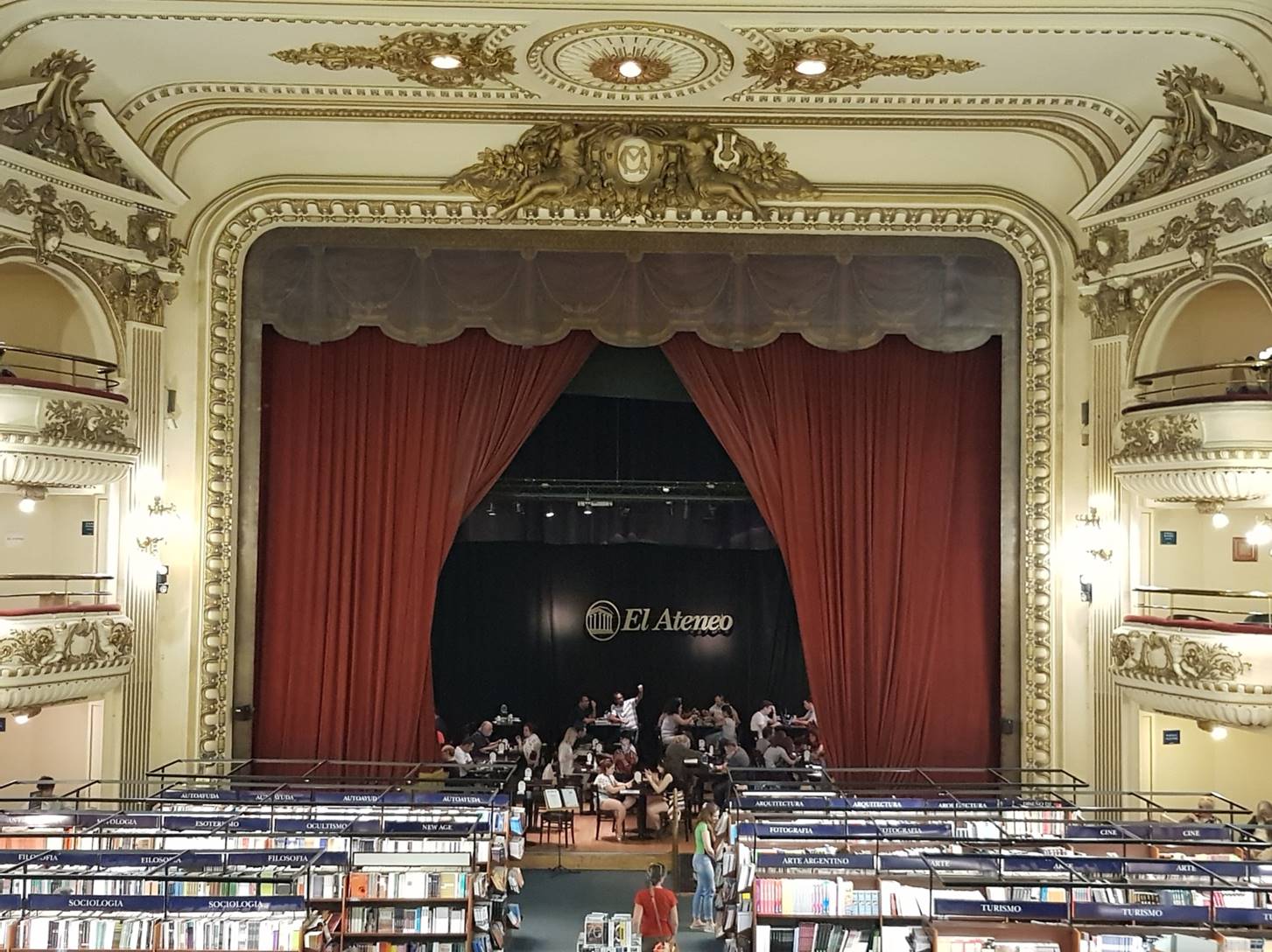 “But what if it doesn’t work out with Alfonso?” I asked.

“This is so exciting,” he said as the plane was landing. “You might get married, and I’ve always wanted to be a bridesmaid.” 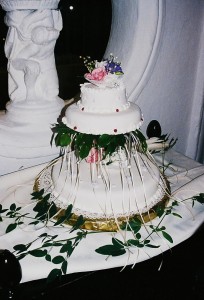 At school they’d shown a film called “Future Shock”, in which two men got married, and we all laughed. Later, I found the idea of gay marriage interesting, not because I’d ever do it, but because it also meant gay divorce. When I was three, mother divorced father the old way – by petitioning on the grounds of his adultery. She named father as the respondent, and the adulteress – the woman who later became my first stepmother – as the co-respondent. I used to wonder, if it were possible for Frank to divorce Vaughan that way, how many co-respondents he would join, how he would track them all down and whether they would need a class action. But Frank would happily listen as I’d hear about Vaughan’s latest experience with some impossibly beautiful man in some impossibly public place, although Frank always got cross when Vaughan burnt the toast. Vaughan and Frank did not have a May-to-November romance; it was more like February-to-December. Mother didn’t like Vaughan’s lack of shame. When I was fifteen, she’d informed me that “sex without guilt is meaningless”.

Alfonso’s photo hadn’t shown his crooked teeth and short fingers. But when we met, we spoke in his language for ten minutes. My TAFE language classes had worked. He then smiled and said, “Patricio” – which is my name in Spanish – “Hablás castellano muy bien.” I answered, “Qué?” He paused, and said, in English: “You speak Spanish very well.”

I then suggested that he might have been a little older than the age he gave on the net, which would have been OK if I’d been wrong, but unfortunately I was right. His green eyes, however, could both smile and frown, and excite and soothe, and very soon I learnt that often they did all four at once. We went to a movie that night and to another the following night, and before long, we were seeing each other regularly, and not just with our eyes.

Alfonso belonged to a gay and lesbian community group that met in a grey brick building directly under one of the freeways that the military dictatorship – or one of them – built in the seventies. He took me along and they accepted me at once, and we talked about being gay as we shared a drink called mate and ate pizzas, which were like those from home, only the bases were made from meat and not bread. When one of the other guys had a birthday party, he addressed the invite to both of us: “Alfonso y Patricio“, and I almost cried, which would not have pleased father. As the cars raced above, we sang “I Am What I Am” – only the Spanish version: “Yo Soy lo que Soy“. And on the night before I had to go back to Perth, there was the Buenos Aires Marcha del Orgullo: the gay, lesbian, transexual, bisexual, intersexual and perhaps a few other sexual – Pride march.

I did wonder why they’d name a march after a deadly sin, but Frank said it was at least better than the others, although I wouldn’t have minded a “gluttony march” and quite possibly Vaughan would have had time for a “lust march”. 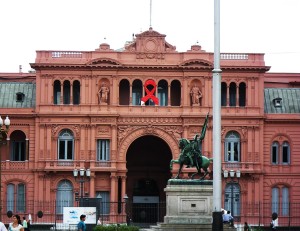 We met at Plaza de Mayo, around which were some important Argentine monuments. There was the presidential palace – called the Casa Rosada – which literally meant Pink House, and it was pink, but not, Alfonso lamented, for this “ocasión“. There was the Cathedral, from which we heard a loud bang, as Catholics and anti-Catholics clashed. Frank said, “We’re all going to get arrested,” but I said, “Don’t worry, the police are too lazy for that.” I thought of mentioning that on the opposite corner of the square, Vaughan was doing something that probably would have got him arrested, but as Maria pointed out to Gretel behind the tombstones at the end of “The Sound of Music”, there are times when expressing yourself does not help. Frank then announced that “this isn’t very organised”, but I said: “We’re in Latin America” – which was my explanation for many things by then.

In fact, we only started 45 minutes late. I then saw a TV camera and said to Frank, “I’m not sure that I can do this,” to which Alfonso put his short index finger around mine, and we started marching amongst the whistles, the horns and the drums.

We met a nun with red lipstick and a matching red habit, a Wonder Woman and also a man, or maybe a woman, or maybe a bit of both, in a frilly dress made entirely of newspapers, which was an inspired idea, although maybe not so inspired as it started to sprinkle with rain. But for the most part, we were men and women in jeans and shorts and tracksuit tops and singlets and blouses and t-shirts, with the odd rainbow flag. 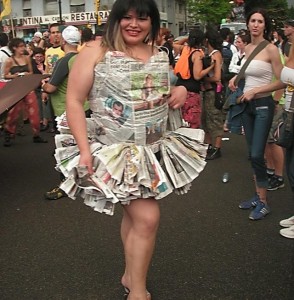 I was expecting it to be like Perth or Sydney, where most people watched, but in Buenos Aires, almost everyone marched. Almost. As we went past McDonald’s, I noticed that it was closed, with nine policemen blocking the entrance. 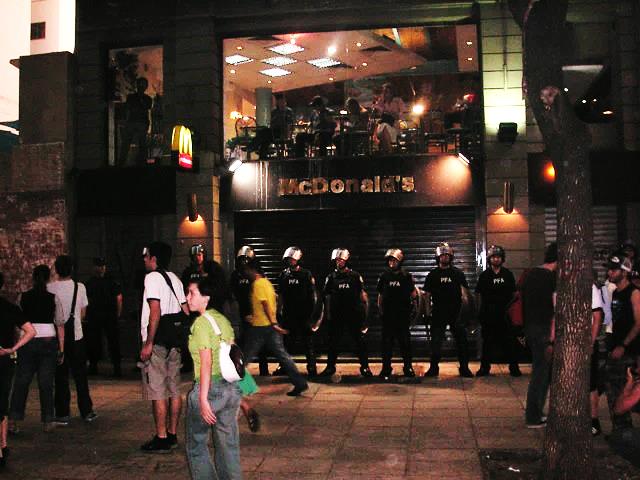 Frank said, “There’s going to be a riot,” but Alfonso had his arm around me and his eyes smiled and I knew that nothing bad could possibly happen. 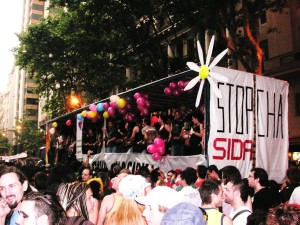 We were a little behind a float telling us to stop SIDA – SIDA being the Spanish name for AIDS – and a little ahead of the parents and friends and family of gays and lesbians. We crossed nueve de julio – the widest street in the world – apart from those that are wider – where a woman was conducting a survey – and marched a little further to Congress, or Congreso. 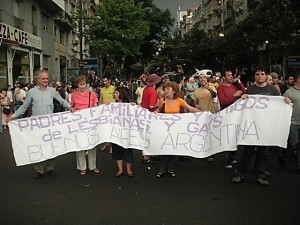 We assembled and heard speeches, and Alfonso cheered and I cheered and we all cheered, except Vaughan, who was getting good cheer from a cheer squad he’d assembled, and I wondered how he had managed that without speaking Spanish.

The theme of that year’s march was “Queremos los mismos derechos” – we want the same rights. By then, some of this had been achieved, and gay marriage was possible in Buenos Aires. Which also meant, of course, gay divorce. But as Alfonso’s fingers gently touched my waist, I realised that if I married him, I wouldn’t be thinking of adultery or class actions or co-respondents. And then Frank said: “You look so cute there,” which no-one had ever said before. “I’ll take a photo.” So Alfonso tilted his head slightly into my neck and I felt his sweat, for it was a balmy November night. Two beautiful men danced on stage, a rock and roll band played, and then, as pink fireworks went off and whistles blew, we all started singing “Yo Soy lo que Soy“, and I stood in my baggy t-shirt and slightly frayed jeans. I was Patrick from Perth, lost in the Argentine man with the crooked teeth, short fingers and beautiful eyes. Sudddenly, all the taunting and the hiding and the guilt and the shame and the lecturing and the counselling and the hours I’d spent in the corners of gay bars waiting for Mr Perfect to look at me just didn’t matter. And for the first time in public, we kissed. 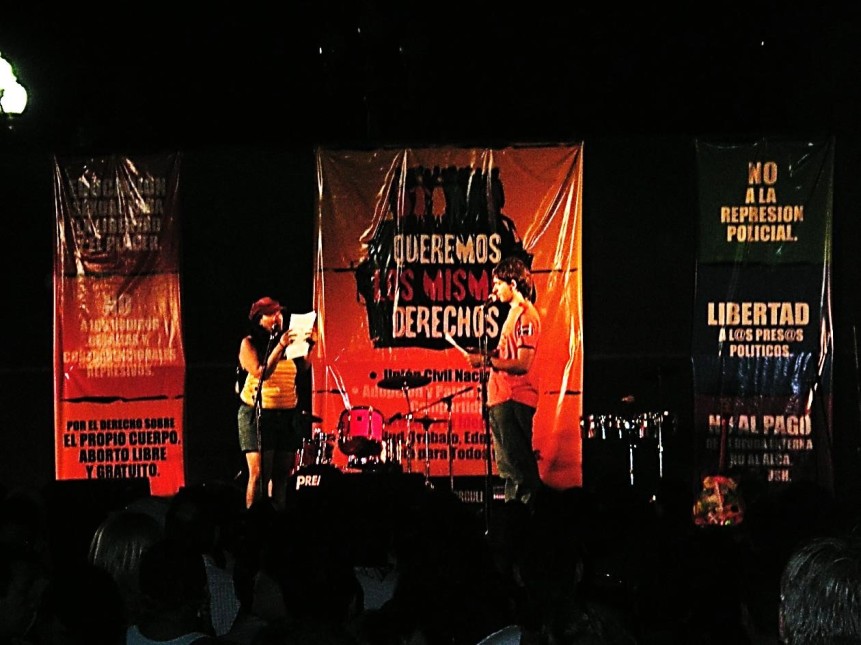 We all went back to the grey building. We heard a crash and Vaughan somehow found out that above us was a five car pile up, somehow got on to the motorway, and somehow found a man to entertain in a car that was waiting for the jam to go. Only somehow Frank started screaming at him, to which Vaughan said: “My genius cannot be limited to one man,” to which Frank pointed to himself and said: “You are allowed to get with this one man sometimes!”

But in the building below the commotion, there was a side door with an old blackboard, plastic chairs, trestles and a few books, and whilst the others were drinking mate and talking about a dance party, Alfonso and I slipped into the room, and we kissed again softly and I asked, “Me casás conmigo?” and after correcting my grammar, he replied that he would indeed marry me and then we kissed and caressed and realised that our love was so special, and it knew no boundaries.

Unfortunately, whilst love indeed did not know boundaries, I soon discovered that visa authorities did. So back in Australia I am, alone. Being alone before was never like this. I’ve jumped a level at TAFE. The kitchen’s finished and I’m getting quotes for the bathroom. Vaughan is trying to get me to “see other people”, but Frank lets me talk about Alfonso, and I’m glad they met, because he can tell me that it was real. Is real. I’m phoning Alfonso tonight, and as we try to work it out, I’ll be looking at the photo that Frank took, because at that march, in that photo, and with that kiss, I was glad to be who I was because I was with Alfonso. And when I look at us together, I understand it now, all of it, because what I feel isn’t deadly and isn’t a sin. What I feel is one word, and that word is pride.