The best way to find out the meaning of skycouch 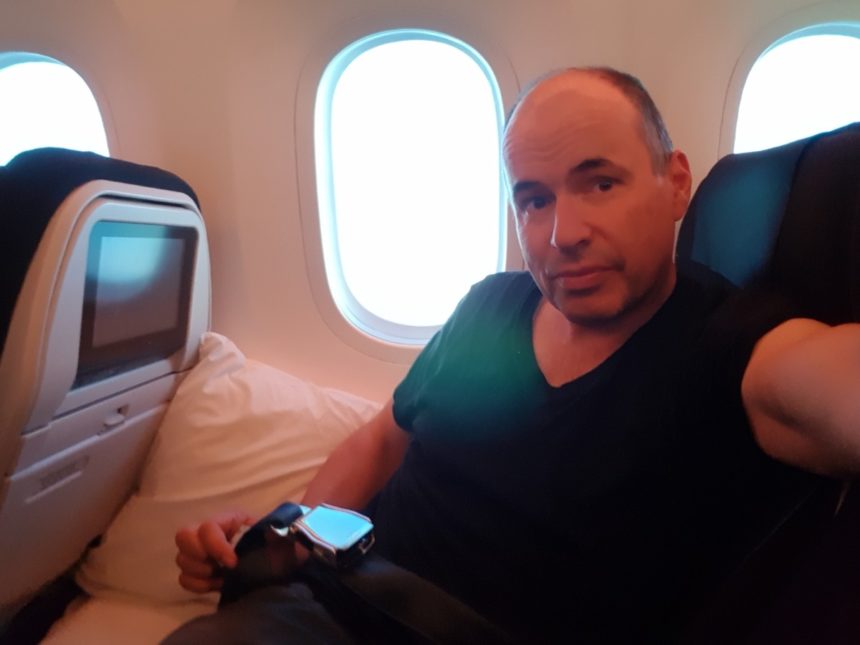 On the weekend, I was due to fly back Economy from Argentina on Air New Zealand, but they sent me an email, saying I could put in bids for upgrades. It was up to me how much I bid, but they had a dial showing how strong (or otherwise) a particular offer would be.

I bid 720 Australian dollars to use the Skycouch on the 14 hour flight from Buenos Aires to Auckland, and found out the day of the flight that I was successful. I thought it just meant that I got three seats to myself in Economy. No, no, no!

The seats folded up … 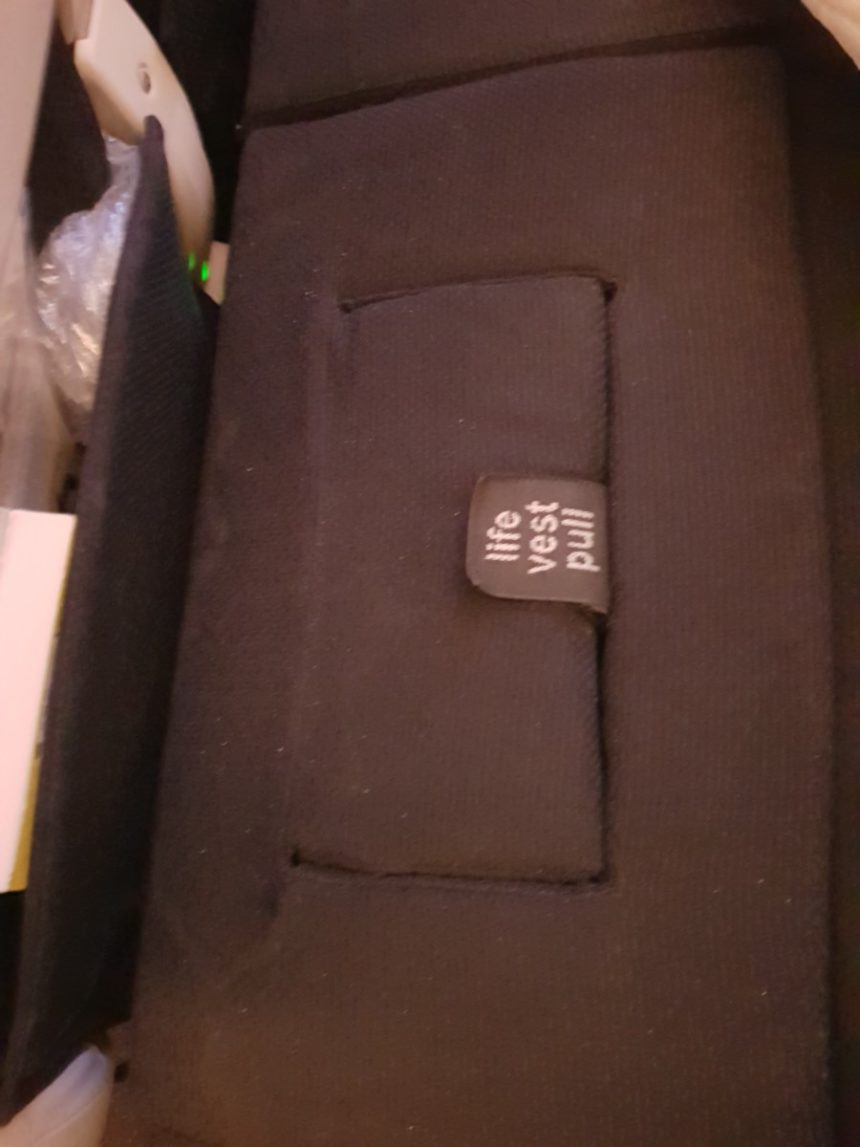 … to form one big mattress that extended all the way to the seats in front. I also got a mattress cover, plenty of pillows and blankets, which I did my best to mess up as quickly as I could. 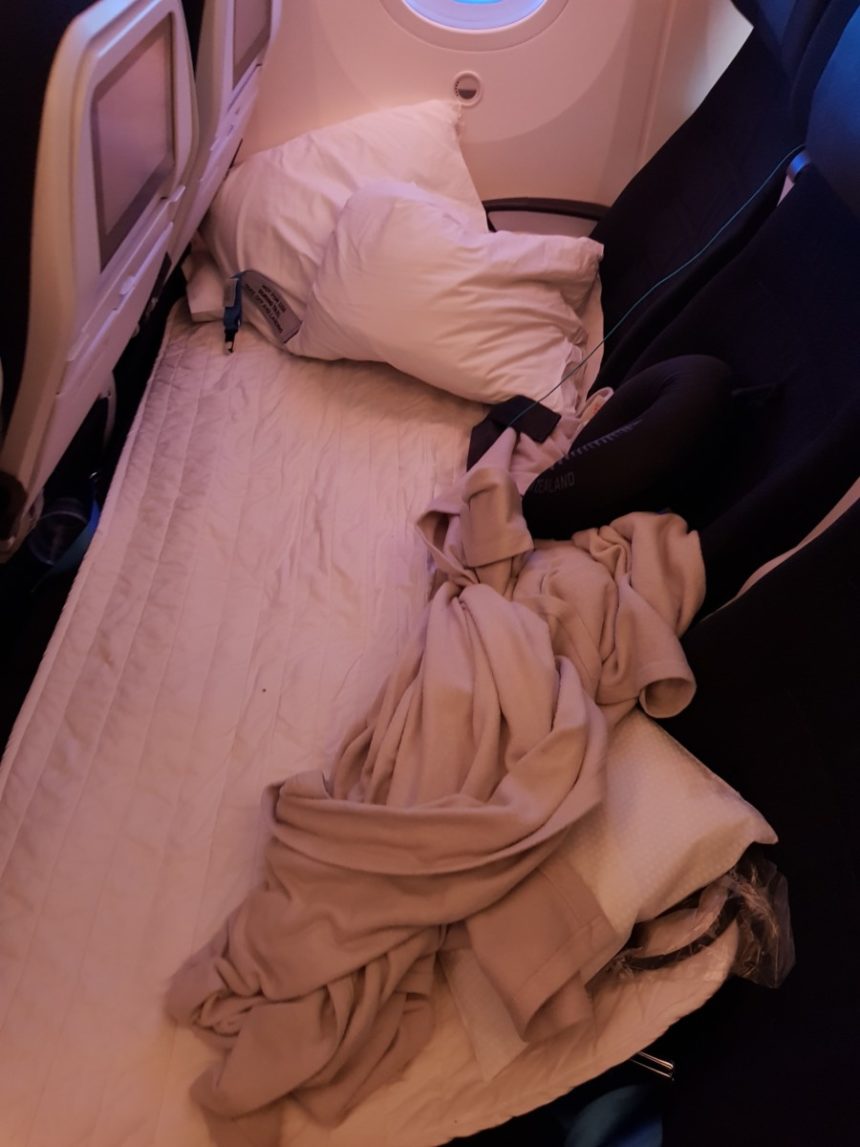 Plus there were special long blue seat belts. I didn’t quite understand how they were supposed to work, but I set one of them up in a way that kept me secure and comfortable.

I’m about five foot ten (178 cms), which was just a little too tall to lie down with my legs fully extended. But I could sit against the window with my legs stretched, or lie down with them curled, and did both at different times.

I slept for maybe seven hours, probably longer than on any of my 19 nights in Buenos Aires. And without sleeping pills. And despite the Jack Daniels and Coke Zero I bought at Ezeiza Airport to use up some of my pesos, and the sugar overload from my two milkshakes at the Iceland ice cream shop in San Telmo.

In the row in front of me, a woman and her two small children all used the one Skycouch. They had enough room all to lie down together. They were also promoting it for couples, but for that to work, I think you’d have to be small, intimate or both.

Without Skycouch, I could have paid $90 to upgrade to an exit row seat from Buenos Aires to Auckland. The next time I fly to Argentina, I expect my budget to be a bit smaller (or, more accurately, I won’t be in as good a position to blow it). So if that option is still around, I might take that and combine it with pills.

I didn’t bid for Skycouch for the seven-hour Auckland to Perth leg, because I didn’t think I’d need to sleep then. I sort of accidentally put in a $365 bid to upgrade to Premium Economy for that part, which I didn’t think too much about because I knew they wouldn’t accept it. But they did. So maybe it’s worth making a cheeky bid.